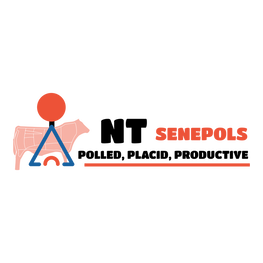 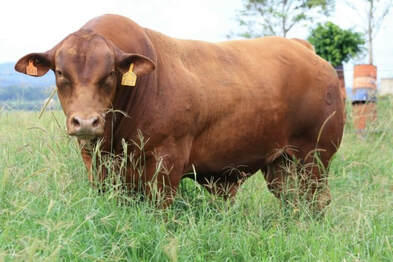 GODF00043 A prolific Namoona Trig Senepol Sire
Back in the late 90’s Col developed an interest in Senepols after following a link from a Red Poll Website. Col & his family have had an association with Red Poll cattle for over 50 years.

At this stage Col was operating a Veterinary Hospital in Taree & was not in a position to pursue his passion to operate a grazing operation.

The purchase of the home property in late 2005, afforded Col the opportunity to set up a stud cattle operation. Being in a sub tropical, sub coastal location it was obvious to Col that the Senepol with all their attributes were the ideal breed for what he had in mind.

At the 07 Caribbean Sale we purchased further high quality cattle allowing us to expand our numbers & our gene pool. Subsequently we dominated the female section of the 08 Five Star Sale purchasing 11 outstanding females. Since then we’ve purchased by private treaty heifers from Caribbean, heifers from Five Star, in 2010 we purchased the Autumn calving portion of the Eaglehawk herd which entailed 30 cows & in 2015 we purchased some females from Carlowrie Park Senepols when they dispersed as well as the Pinnacle Pocket Senepols purebred senepol herd from the Atherton Tablelands. All told we’ve purchased over 200 females & several bulls at a cost of around $600,000. Initial sires purchased were AACSE4P010, AACSE3N15 & CBN 5315.

We now have over 350 purebred registered females making Namoona Trig Senepols the largest herd of registered Purebred Senepols in Australia. Having these numbers allows us to implement a strict selection policy, which assists us in our ability to supply quality productive bulls.

Our initial aim was to produce efficient grass raised bulls for the local environment. We have become realistic & realize that the type of bull the market demands is not produced off Rhodes Grass alone. We do not apologise for supplementing our cattle at weaning & in the preparation of bulls for sale, this just puts us on a level playing field with other seedstock producers.

We aim to produce well muscled, functional medium sized cattle that will produce efficiently in a tropical/subtropical environment in varying nutritional situations.