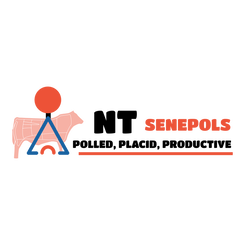 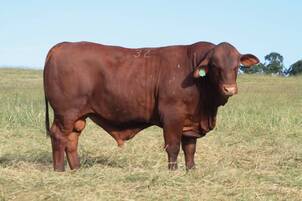 Top Price Bull GODQ90035
Being forced to shift to an online format may have caused some sleepless nights for the Godfrey family, but the results of their NT Senepols Invitational Sale on Monday speak for themselves.
​
Offering 33 bulls, 31 sold to a top price of $10,000, for a clearance rate of 91 per cent and average of $5700 - up from $4886 in 2019. 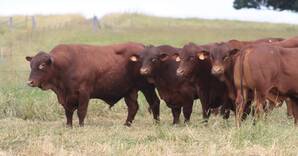 Some of the 2020 Sale Bulls
A striking draft of 37 Senepol Australia Registered Bulls have been selected for the Namoona Trig (NT) Senepols Invitational Sale, which this year due to the uncertainty surrounding COVID-19 restrictions will be held online only from 10am on Monday, June 22.

Top price bull GODN70042
A total of 22 bulls sold for an average of $4886 at the NT Senepols Invitational Sale held at the CQLX, Gracemere, representing 55 per cent clearance on Monday.

The top price bull was a 21-month-old son of Namoona Charles Barkley, and was bought by the Hack family of Alpha. The Hacks finished with two bulls for an average of $8500.

The promising sire was promoted as an "exceptional example of a Charles Barkley bull". He is a long, well muscled bull with an EMA of 130, a scrotal measurement of 37.5cm and weighed 778kgs. Read More... 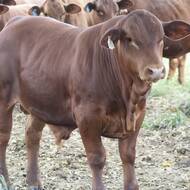 The now stand-alone vendor sale, including three invitational bulls from Silverleigh Senepols, will showcase the best line Namoona Trig has presented to date.
The Namoona Trig Senepol Stud has been selling bulls into the Central Highlands and beyond since 2011.

The 40 Namoona Trig bulls offered at the up coming sale are coastal bred and will adapt to almost anywhere you intend taking them. Read More...

Some of the PTIC cows that were sold during the Hazeldean Senegus Dispersal sale online last Wednesday. Picture: AuctionsPlus
After almost 20 years of breeding the Litchfield family, Hazeldean, Cooma, dispersed their Senegus herd during an AuctionsPlus sale last Wednesday.

Offering pregnancy tested in calf heifers and cows, weaned heifers and weaned bulls, 231 of 290 head were sold for a 79 per cent clearance and $1281 average.
In a breakdown of the results, all 52 PTIC heifers sold to average $1570 and top at $1925/hd.
​
At least 123 of the 144 PTIC cows sold for a $1298 average and top of $1450/head three times to the Godfrey family and also Chris Greenwood, Morganbury Pastoral, Atherton Tablelands, Queensland. Read More... 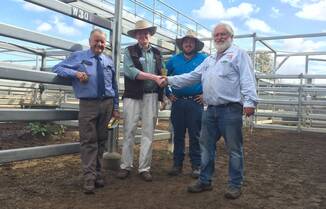 Neville Messer, top price bull buyer Gavin Arneil, The Wee Hirsel, Thangool with vendors Blair and Col Godfrey.
It was a buyers market at the Tropical Invitational Senepol Sale in Gracemere on Monday with a top of $11,000. The sale saw 37 of 67 offered bulls sell for an average of $4216, a gross of $156,000 and a clearance of 57 per cent.

Top priced bull was lot 43 GODM60074 Namoona M74, offered by vendors Col and Blair Godfrey, Namoona Trig Senepols,Casino, NSW and purchased by Gavin and Diane Arneil, The Wee Hirsel,Thangool who paid $11,000 for the 22-month-old bull.
​
Namoona M74 sired by GODH20036 Namoona Charles Barkley and out of  CBNB181 Caribbean B181 is a 710kg bull with an 85pc semen motility and 126sq cm EMA, boasting a 36.5cm scrotal circumference. Read More...

​Superior Senepol bloodlines to be offered 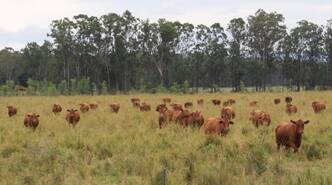 Col, Janelle and Blair Godfrey, Namoona Trig Senepols, together with fellow original sale vendors Kurt and Liz Baumgart, Wiangaree Park Senepols, and Gary and Leanne Porter, Silverleigh Senepols, will be offering a draft of 71 bulls and for the first time in the sales’ history, 11 joined heifers.

“This year we wanted to introduce some Senepol breeding cattle into the region, as they’re hard to come by, so we’ll be closing out the sale with the joined heifers,” Mr Godfrey said. Read More...

Pure-bred Senepol weaner heifers. Senepol cattle are helping northern producers boost weight gain and improve milking in their herds.
BEING able to finish bullocks earlier – and with good fat cover – is a major benefit of Senepol genetics for Queensland commercial beef producers David and Lyn Anderson.
​
The breed’s finishing ability, milking, and temperament has driven a change in the breeding program at Tindarra, a 5700-hectare property in the Banana-Theodore area of Dawson Valley.

The Andersons run about 550 breeders plus progeny, growing steers out as bullocks and selling cull heifers to lotfeeders.
They’ve been using Senepol genetics for the past eight years after purchasing bulls from Quirran-Lea Senepols and 5 Star Senepols. Read More... 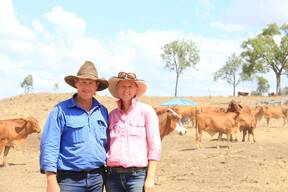 Jeff and Sue Trott, Thooruna, Mundubbera are one of many producers in the Wide Bay-Burnett who are waiting for rain.
THEY are five inches short of their average summer rainfall and haven’t seen run off rain in 22 months but Jeff and Sue Trott, Thooruna, Mundubbera are still smiling.
The family run a Droughtmaster and now Senepol cross cattle operation on their 4654 hectare property 80km from Mundubbera selling bullocks direct to the meat works.
Due to a dry season this year they were forced to sell “the bottom half” of their number five steers to feedlots for the first time to have a better chance at finishing off the remaining half.

They are currently feeding dry lick to their herd, one of their dams is at its lowest levels since owning the property in 2006 and another dam is being cleaned out. Read More... 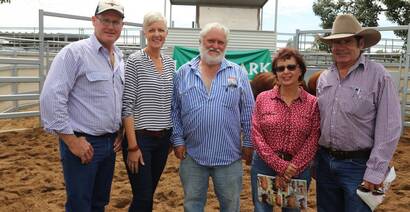 TOP PRICE: Jeff and Sue Trott, vendor Col Godfrey, and Kathy and Andrew Hawkins.
Six vendors sold in the sale, but it was Casino’s Col and Jangle Godfrey, Namoona Trig Senepols, who sold both of the equal-top priced bulls, which sold for $6000 each. 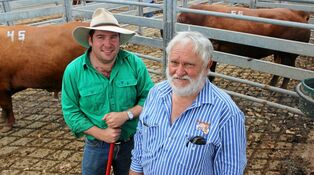 SENEPOL BULL SALE: Vendor Colin Godfrey with son Blair.
IT'S A long journey north for vendor Colin Godfrey and his son Blair to sell their bulls at Emerald.
The Senepol bull breeders have travelled from their cattle farm, Namoona Trig in Casino, nearly every year since 2011.
The Tropical Invitational Senepol Bull Sale, the vendor's second combined sale, was held on Tuesday.
The sale consisted of 74 Senepol Australian registered bulls Read More... 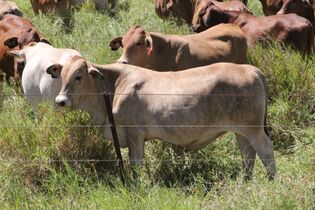 One of the Senepol/Brahman cross animals at the Douglas Daly Research Farm.
A beef researcher with the Northern Territory Department of Primary Industry (DPI) says Senepol-Brahman cross cattle are showing distinct production advantages for both northern cattle producers and Indonesian importers.
​
The DPI has been studying the benefits of breeding Brahmans with Senepol bulls, and recently sold a number of crossbred and straight Brahman steers to an Indonesian buyer.
The steers were followed by DPI researchers and their weight gain was tracked over 121 days in an Indonesian feedlot.

Co-ordinator of the Beef Research Program for the DPI, Tim Schatz, said on average, the Senepol-cross steers put on an extra 21 kilograms Read More... 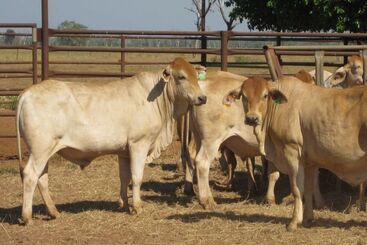